A fan of Star Trek can’t help but imagine the R/V Sally Ride with its humming engines, narrow hallways, and various clicks and beeps shuttling through space on a mission of scientific discovery.

Although the Sally Ride doesn’t leave this planet’s gravity, the rest isn’t far from the truth. This state-of-the-art research vessel, named for the first American woman in space, has traveled up and down the West coast of the United States conducting oceanographic surveys. Soon, it will embark on a foray into international waters.

For a glimpse into what that will be like, SANDSWA members went on a tour co-led by Matt Durham, a resident technician with the Scripps Institution of Oceanography, and Melissa Miller, a marine technician transitioning into her own career in communication. The tour started with some of the best images and data captured during the ship’s time on the water. One graphic showed a seamount — an underwater mountain — so far below the surface that the Sally Ride sailed clear over it. A separate graph showed a huge spike in mass detected by the ship’s sonar as marine life migrated under the cover of night to feed at the surface, where the ocean teems with microscopic plankton.

(This “scattering layer” of marine life, as it’s called by scientists, is so incredibly dense that sonar operators once mistook it for the seafloor.)

Next, everyone worked their way through the ship’s maze of stairs and close hallways to visit the mess room, check out a typical cabin, and peer down into the engine room itself. Throughout, Melissa was happy to answer questions about what it was like to live and conduct research onboard. She described intense twelve-hour shifts, waking up airborne when the seas were particularly rough, and curling up on a hammock on deck when she had time off. 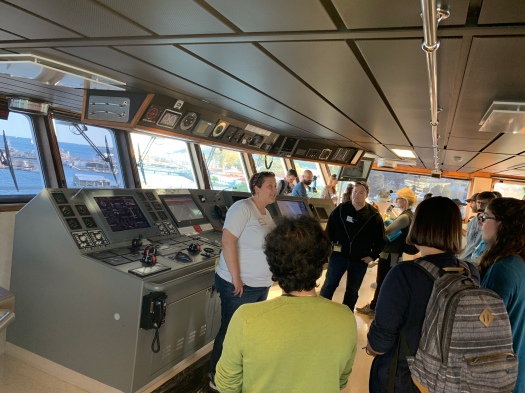 A little about Sally Ride herself: in addition to being the first American woman in space, Ride was an avid tennis player, science enthusiast, and science communicator. She held degrees in both the sciences and the arts from Stanford University. At the time she applied to work with NASA, she outperformed thousands of applicants to become one of 35 people chosen to become mission specialists. At 32 years of age, she was in space.

Sally Ride passed away after a long battle with pancreatic cancer on July 23, 2012. In 2013, President Barack Obama awarded her a Presidential Medal of Freedom — the highest possible award for a civilian in the nation.

Today, the R/V Sally Ride continues to uphold a tradition of scientific discovery and outreach. At the close of the tour, SANDSWA members climbed to the research vessel’s viewing deck to look out at the glittering harbor. The sun was out after long weeks of rain, casting golden, late-afternoon light on blue water. Soon, the Sally Ride will leave its dock for another expedition, and another; and it will need science communicators to help it share its new discoveries.

SANDSWA members are invited to apply to join the crew of the Sally Ride on future trips and communicate its research. Here are a few tips for securing a spot: